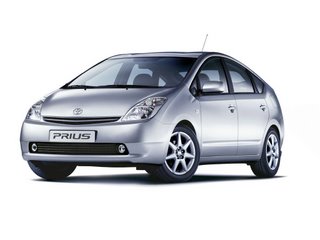 
The Toyota Prius is the first hybrid car sold in mass production on the world market. Initially in Japan in 1997 then everywhere in 2001. Two years later, nearly 160.000 cars were produced for Japan, Europe and North America.
Then a lifting in 2003 and here we go.

Hybrid vehicles use several systems of propulsion. Most of them being hybrid electric-gasoline (or diesel). Several models, like Prius, reload its batteries thanks to cynetic energy. Prius is even “full hybrid”, since it can use the combustion engine to generate electricity while running a generator (like a second electric motor). More details at this address.
In the same category, let's quote the Honda Civic IMA.

And here we come to the main subject. Some owners of Toyota Prius are not convinced by the functionalities of their car, and try to hack it, i.e. try to modify some characteristics!

First level: eliminating the beeeeeep from the reverse gear or the not-buckled belt. The procedure is not easy but is however almost explained in the handbook.

Next level: being able to use the board-computer while you're drinving. Originally, most of commands are not accessible over a certain speed. It's more difficult and a little less legal, since actions are sometimes broughts to car manufacturers when an accident occurs. Stupid but it works in some countries. Then the manufacturers protect themselves by implementing this limitation.

Next level: more complicated but more interesting: forcing the car to run on the electric power and thus reducing the petrol consumption. Note also that the Japanese or European models make it possible to remain in electric mode at low speed, but not the American model. The place for this button is empty. Thus, some American people are astonished by this failure, since the consumption and thus pollution are really reduced. There are also American companies (Coastal Electronics) that are selling modification-kits to add this functionality.


source : news.com, middle of May.